What is 404(b) evidence and how can it harm… and help you? This kind of evidence is commonly used for the prosecution to show that the defendant has engaged in conduct that is similar to the charges that are against them. However, there are various scenarios where this kind of evidence can aid you in your defense. Sexual assault and domestic violence are the most common types of cases for this kind of evidence but it more generally applies to evidence of other crimes, wrongs, or acts of any person. 404(b) evidence can be extremely harmful to your case because it is often evidence of other acts that you were never charged or even investigated for.

404(b) evidence is a rule of criminal evidence to show other wrongs, acts, or crimes. However, this evidence must not be submitted for the purpose to prove the bad character of a person. 404(b) evidence has a much larger scope. Evidence submitted under this rule is s to show:

8) or absence of mistake, entrapment, or accident.

The timing of the act or wrong that is trying to be submitted into evidence is not as important as you would think. The crime or act being submitted does not have to come before the crime being charged, it can be an act that happened after the charges that you are facing. This is important because it forces people to have to be conscious of their behaviors even after someone is charged with a crime.

404(b) evidence doesn’t have to be an act or crime that leads to a conviction. This is extremely important because it goes to the threshold of what is allowed into the courtroom and what is not. All it takes is an accusation that someone has done something similar for the evidence to be submitted to the court. You don’t need paperwork or proof, all you need is someone to come in and say that the defendant (or the victim) has engaged in acts similar to the current charges.

In order for this rule to be relevant evidence, there must be sufficient reason that the person committed the act and that there is a reason other than to make a statement of someone’s character. Once it is established, again this can be as simple as someone accusing you, that the defendant committed the crime, then there is an analysis that takes place to see if the information is relevant under the 404(b) rule of evidence. This analysis looks like the diagram below. 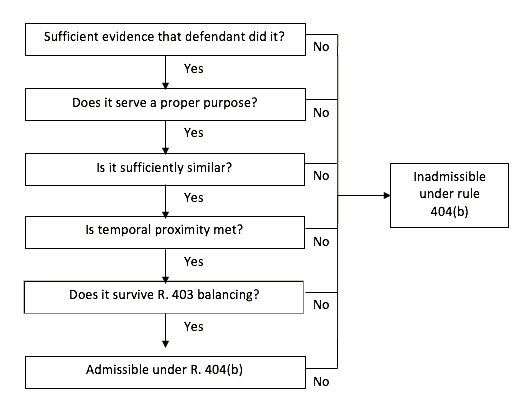 404(b) evidence can be litigated prior to trial. If you are unable to prevent the introduction of 404(b) evidence by the time you have reached your trial, it can be far more difficult to keep that evidence out. Experienced legal arguments are required to 1) force the prosecutor to disclose any 404(b) related evidence, and 2) explain to the Judge that the prosecutor’s goal is to use that evidence to show that you have a bad character.

What About Your Case?

Any and all evidence that will be submitted to trial is up to the discretion of a judge. If the judge doesn’t think that your evidence meets the above circumstances then he has the ability to keep that information out of the courtroom. You also should keep in mind that you can’t just throw information into court in order to make the other party look bad. Every case is unique, you must contact an attorney to see if 404(b) motions are right for your case.