Gun Laws in the State of Colorado 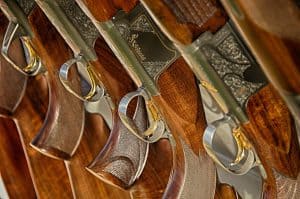 Gun Laws vary from state-to-state. Whether you already own a gun or are thinking about purchasing a firearm, this article will cover the most common Colorado gun law questions.

According to Colorado.gov there are two major gun laws in the state of Colorado: Title 18 and Title 33.

Title 18: Colorado law allows a person to possess a handgun in a residence, place of business, or automobile as long as it is in plain sight and if its use is for lawful protection of a person or another’s person or property [C.R.S. 18-12-105(2)].

Title 33: In accordance with Colorado wildlife laws, including C.R.S. 33-6-125, you may carry a weapon in your vehicle. However it is unlawful for any person, except a person authorized by law or by the division, to possess or have under his control any firearm, other than a pistol or revolver, in or on any motor vehicle unless the chamber of such firearm is unloaded. You can find the rest of the gun laws here but know it is the individual’s responsibility to know and be in compliance with the laws regarding guns in the state of Colorado.

Do You Have to Register a Gun in Colorado?

The short answer is no. Colorado laws do not mandate or require firearms to be registered. However, if you are purchasing a firearm from a dealer or gun show there will be paperwork and background checks. Information such as the purchaser’s name, age, address, and occupation will be recorded, along with any information regarding the firearm being purchased. These records are official and can be submitted to authorities if needed for an investigation.

How Long Does it Take to Get a Handgun in Colorado?

Are There any Types of Guns That are Illegal in Colorado?

Yes. It is illegal to own the following types of guns and gun accessories in Colorado, as they’re classified under federal or Colorado law as dangerous weapons. Please note, this may not be an exhaustive list:

How Old do You Have to be to Get a Gun in Colorado?

In the state of Colorado, you must be 18 years or older to purchase a shotgun or rifle. In order to buy a handgun, a purchaser must be at least 21 years of age.

Individuals Restricted From Carrying A Firearm:

Colorado has something called a “red flag law”, which allows police or family members to ask judges to temporarily confiscate firearms if someone is deemed to be an “extreme risk” to themselves or others. This type of situation is called an extreme risk protection order. (Colorado House Bill 1177 (2019)

Is it Legal to Open Carry in Colorado?

Yes and No. It is legal in most parts of the state of Colorado to open carry a firearm. In recent years, the city of Denver has restricted open carry. Other cities may follow suit, so be sure to always check the latest amendments to the law. Please note, that no matter where you are in the state of Colorado, guns are prohibited in such locations as school zones and federal buildings. Furthermore, in non-restricted areas, a person may open carry a firearm in a vehicle as long as the weapon is unloaded.

In order to acquire the permit for a concealed weapon in the state of Colorado one must:

A permit to carry a concealed weapon is authorized for five years and may be renewed. Securing a license to carry a concealed weapon in the state of Colorado is ultimately up to the sheriff’s department. Even if an individual meets all of the criteria, the sheriff has the final say on who will be granted a permit and who will not. In addition, a license may be revoked at any time if an individual no longer meets all necessary criteria.

Consequences of Not Following Gun Laws in Colorado

Felons are not permitted to possess firearms in Colorado. Depending on the crime you were charged and convicted of—and when the said crime occurred—you could be facing penalties up to and including:

Otherwise, unlawful possession of a firearm will usually be considered a misdemeanor in Colorado. If you’re found guilty of a misdemeanor gun charge, your punishment could be up to and including:

If you are a gun owner or considering purchasing a gun always make sure to check with your local police or reputable online sources to clarify gun laws if in question. It is ultimately the responsibility of the individual to know and be in compliance with the law. Also, if you are charged with any crime involving a gun contact a lawyer immediately.