In the State of Colorado, you can be charged with either a felony drug crime or a misdemeanor drug crime. These different levels of crimes come with significantly different consequences that will affect the rest of your life. In 2013, Colorado State Legislator enacted a new bill that made significant changes to the sentencing of drug crimes in Colorado.

The new legislation allows for certain offenders convicted of Colorado drug felonies to depart from the felony conviction and enter a misdemeanor conviction in its place after the offender has completed a community- based sentence. Not all felony drug crimes are given this opportunity. There are specific classifications that can make you eligible for this kind of treatment, not every felony drug case will be allowed this opening. C.R.S. 18-1.3-103.5 (1) (3) (4).

For level 4 CO drug felonies the bill creates a plethora of requirements prior to sentencing the defendant to prison. This section of the bill requires that the court exhaust all other sentencing options to ensure that the states prison resources are being used for offenders for which there is no other appropriate punishment. This also provides offenders a greater chance for rehabilitation or a punishment that will benefit the defendant as well as the community. There are certain factors and requirements that the court must take into account before sentencing a level 4 drug felony to the department of corrections. C.R.S.  18-1.3-104.5 (2) (b)

If an offender who is convicted of a level 4 drug felony is terminated from community corrections sentence, the court is required to hold a re-sentencing hearing or document written findings regarding the original sentence. This forces the court to comply with the above requirement for the bill. This section allows for other opportunities of punishment before the defendant is sentenced to prison. This section does not guarantee that an offender will not go to prison; it simply states that court has to review the case and see if there is another acceptable punishment before sentencing to the department of corrections. C.R.S 18-1.3-30.

This bill does not apply to felony drug charges before October 1, 2013. For crimes after this date period, drug felonies are divided into four different levels that differ in their range of punishment (see table 1). The court is allowed to sentence you in the aggravated range if they find evidence that your drug charge is aggravated in nature. C.R.S. 18-1.3-401.

The bill also allows for you to petition to seal your conviction record even if you submit to a plea agreement. This does not guarantee that you will be granted a petition to seal; it just does not make you ineligible to petition just on the grounds of you signing a plea agreement. There are other specific requirements that make you eligible to seal your record. Not everyone convicted of a felony drug offense is eligible to seal their record. Drug offenders convicted after July 1, 2011, have the opportunity to have their record sealed.

There is substantial wording in the new legislation that encourages the collaboration between primary health care, behavioral health care, criminal justice programs as well as social service systems when considering an appropriate sentence. This has a significant impact on those charged with colorado drug crimes. Not only does it enhance public safety by reducing the number of drug users in our communities but it also helps the offender by reducing the likelihood of them having further contact with the criminal justice system. This kind of collaboration is essential in helping every member of our community including offenders. C.R.S. 18-18-401.

This new Colorado drug sentencing law will have a great effect on those charged with a felony or misdemeanor drug crimes. This gives people a greater opportunity to rehabilitate themselves as well as help the community instead of just going to jail. Please contact us for more information or visit the bill below for more details on this new piece of legislation. 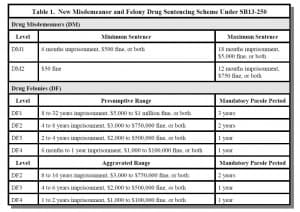